I love a good bratwurst anytime of the year. My love for brats actually started early on when my folks would bring home Johnsonville brats from the store. I always used to think they were really great, especially when you brewed them in beer. But as is the case with most mass-produced products, they generally serve as a gateway drug to better things and that was definitely the case with the Johnsonville.

When I set out to develop the recipe for the perfect bratwurst, I first decided I wanted to make a 100% pork sausage in the style of the Wisconsin bratwurst. But I wanted the brat to have a great fresh flavor and I wanted it to be extremely juicy. So I researched several recipes, and then tweaked and modified until we hit pay dirt. If you have any love for the Wisconsin Bratwurst, take ours for a test spin.  Here are some great ways to cook the perfect bratwurst!

Warm up a pot of beer. It can be an American macro-brew like Bud or Miller, or you can get a little fancy and use a nice Octoberfest or german pilsner.  Warm the pot up but not to boiling. Toss in your brats and let them get nice in the beer for about 5 minutes or so. Then remove from the beer and take your brats immediately to the grill. Cook using indirect heat and then place over direct high heat to get some finishing char!

I love cooking sausages in the oven because you get a nice even cook with no case splitting. To Achieve this sort of culinary perfection, preheat your oven to 350. Put your thawed brats onto a pan in the oven. Allow to cook for 10 minutes before flipping. Cook for another 5 minutes then remove from the oven. Take to the grill and sear off on direct heat to get some char.

If you are a bratwurst purist, you may just like grilling start to finish. To get the best results, cook your brats in indirect heat until fully cooked. Then,just before pulling them from the grill, give them a nice char by throwing them on high direct heat. Pull them before you start a grease fire and smoke out the neighborhood!  For a little additional flavor, you can also throw some wood chips on the grill to get some nice hardwood smoke on the brats before you finish them. 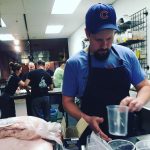