This coming week’s Dinner For Two is a Greek style chicken pita dinner w/ Roasted Garlic Hummus and Greek style pasta salad. It’s a lighter, fresher dinner to coincide with the impending heat. Have you ever thought about the history of the Pita? Bread dates back a long, long time. But baked, leavened, flat bread has specific references dating back nearly 14,000 years. Think about that for a second. It’s Crazy to think about a food transcending through 14,000 years of human history! Pita is found in numerous cultures around the Mediterranean and the Middle East and in several variations. Historically it didn’t have a pocket in the middle, it was simply a flat bread. The pocketed version of the bread has been determined to be a much more “modern” version of the pita bread. But modern in this case is maybe 4000 years ago instead of 10,000.

Pita is leavened, but it is only proofed for about 15 minutes before being baked. The pocketed version of Pita is made by cooking the flat bread at higher temperatures, this causes the bread to balloon from the steam on the inside of the flattened bread. The bread then fully cooks and collapses as it cools creating the pocket on the inside. Historically cooking bread was done by taking dough and tossing directly onto the coals of a fire, or inside an earthen oven like a tandoor. Today, most pita is made at industrial scale. 100,000 pound batches of dough are mixed, and then a highly automated line of machines proofs, portions, flattens, bakes, cools, and packs the bread. The ovens used on industrial pita production are generally at 900 degrees F and they cook the bread in one minute. BOOM! That is one heck of a change!

Anyhow, Pita is cool, and there is a lot of cultural nuance to the bread. Don’t take my word for it, look it up! Fascinating stuff!

Pre-order your Dinner For Two for June 10th, 2021 here. Try it with a bottle of Txakolina, a ridiculously refreshing white wine from the Basque region of Spain. 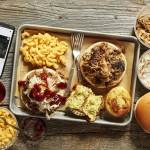 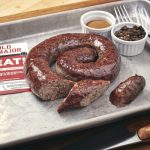